Long you live and high you fly

And smiles you"ll give and tears you"ll cry

Is all your life will ever be

Madam, God is Great, What Will You Give me Today?

The same words every day, in broken English and a wide, toothless smile. He wore a dirty shirt, too big for his skinny body, and a ripped pair of pants. His eyes were dark, black. It was difficult to guess what they had seen and what they were hiding. Always there, with his outstretched hand and a big smile, -What will you give me today...?


He wasn't over ten years old. Dirty hair and chewed down fingernails. But his toothless smile was always wide. When he was not asking for food he used to sit by the side of the street between the two large elm trees. He had built his own tiny house. Two cardboard boxes and two green crates blocked the way to the uninvited guests. That was his kingdom and he was the king. He kept his treasure there too, a tattered school bag that he always carried with him. He held it tight in one hand whenever he ventured outside his "house".


Ahmed, who had the small shop across the street brought him goodies every day. Before giving them to him he used to tell him:"Give me your bag and tell me what you keep inside". The boy would become stubborn and pin his gaze to the ground. He would not smile anymore. Ahmed found the kid's anger funny, he'd stuff the kid's hands with chocolates, milk, and fruit and walk away. The boy would go back "home". He'd sit under the large elm, neatly arrange his ripped bag by his side, and happily start chewing at whatever the good-natured shopkeeper had given him.

At first I used to walk by him without stopping. I had just arrived in Jordan, I still knew nothing about the country and there was that kid, always standing outside my house, always smiling at me.


-Madam God is Great, what will you give me today?


I stood and looked at him.


-What is your name? I asked him. He gave me another wide smile and kept staring without understanding much.


-Name, who are you? I said in the plainest English I could muster.


-Nice bag, I said and pointed with my hand. The kid looked at me with fear. His face changed, the smile faded away, and his black eyes pierced mine. I understood that I had said something I shouldn't have.


-Don't be afraid Ahmed, I told the boy as simply as I could. I gestured at him to wait. I went away, almost at a run, and I came back with a fragrant 'Za'atar', the traditional Jordanian bread.


The boy was waiting for me. He had sat on the side-walk with his bag firmly clutched. Once he saw the Za'atar his eyes shone. For the few following moments he kept looking at the bread and repeating the only phrase that I understood in Arabic- "God is great, God is great".


I left him to eat his bread in peace and walked away.


From then on, I used to see him every day. With his bag, smiling at the passers-by and saying that God is great.


One morning Mohamed was standing motionless on the side-walk. He was not smiling, just holding at his bag and staring at the ground. I went close and saw that he had a deep gash on his face, filled with dried blood.


-Mohamed are you ok? The kid would not answer, he just looked at me with a sad expression.


I shouted for Ahmed who ran close. We washed Mohamed's face who kept grabbing at his bag without a word. At some point he whispered something to Ahmed and the shopkeeper's face darkened.


The boy looked at us with a sad face; God is Great madam-he said and left with slow steps.


Mohamed was a war child. A young Iraqi refugee who got lost, alone and unwanted in the streets of Amman. Some local kids had attacked him with stones, one of them hit him in the eye.


I didn't see him for a couple of days and I started getting worried. But, on the third day he showed up again, with his big bag and his toothless smile, telling everyone that God is Great.


And that's how days, weeks and months went by. And everybody in the neighborhood was expecting him to greet us and take the food we gave him.


Until, one morning, Mohamed was no longer there. 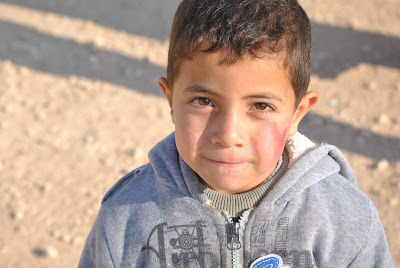 His cardboard house was destroyed. His meager belongings were scattered around, his bag lying between them. It just lied there, on the dirt, its flap open. Close to it were three old photographs, a notebook and a dirty handkerchief. A young woman was holding a child and smiling at the unknown photographer. The same beautiful smile as Mohamed, the familiar dark, black eyes.


But Mohamed was no longer there.


(Little boy, you will now wander in paradise without your bag. But I know that you will not fear any more. I know that the woman in the picture is waiting to hug you and give you all that the people stole from you.)